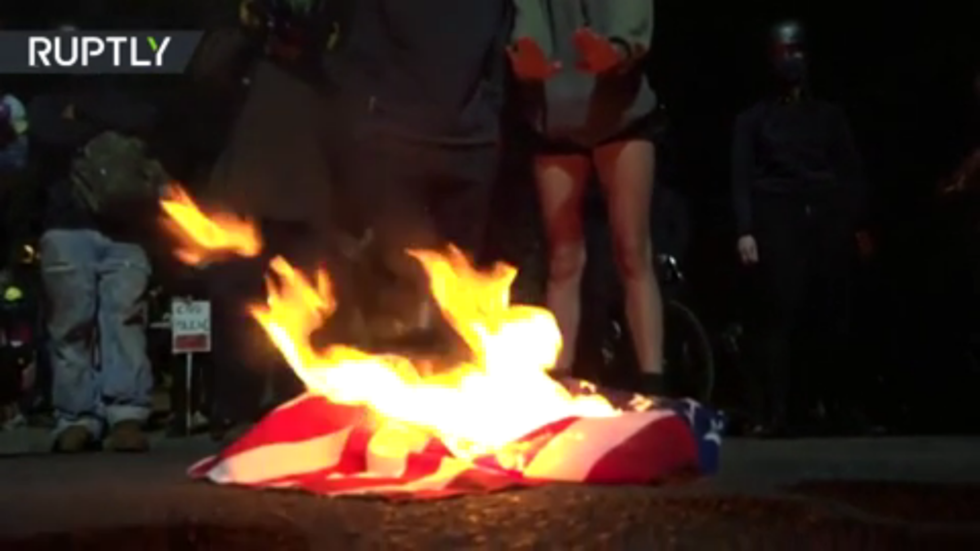 Demonstrators in Portland set Bibles and US flags on fire amid protests that have spanned nearly 2 months. The day before, protesters torched a pig’s head with police clothing, though they still claim their movement is peaceful.

Footage published by RT’s Ruptly video agency shows a group of protesters on Friday night gathered around a burning Bible, with several individuals mockingly warming their hands around the fire. Laughter and shouts of “F**k Trump” can be heard in the background.

US flags were also burned by the protesters, who were seen crowding around the fire and taking photographs.

The provocative bonfires come one night after demonstrators torched a severed pig’s head that was placed under an American flag. The head was decorated with a police officer’s hat, leaving little to the imagination.

Although Friday night saw considerably less violence than in previous days, protesters were still spotted setting fires and committing other acts of vandalism in the downtown area.

Tensions in the city have been on the rise following the deployment of federal agents tasked with protecting the Mark O. Hatfield US Courthouse. The federal officers have been accused of using excessive force to protect the building, but the task force claims that it has come under repeated assault by demonstrators and has responded accordingly.

The Department of Homeland Security (DHS) reached a deal with Oregon Governor Kate Brown earlier this week, in which state police would be used to keep the peace during demonstrations. Federal forces will remain in the city but will only be used as a last resort. US President Donald Trump has warned that “anarchists and agitators” must be dealt with before federal officers can be withdrawn from the city.