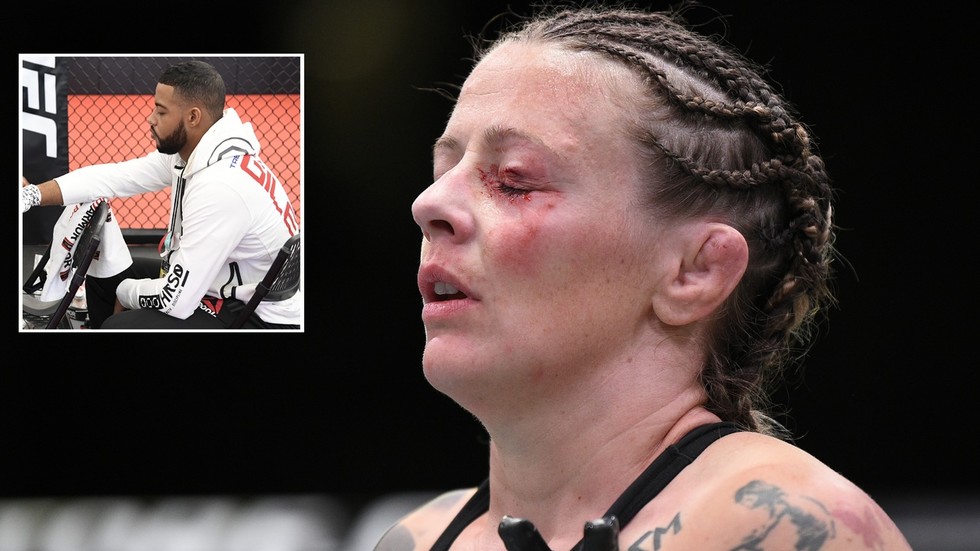 The UFC’s latest card threw up drama outside the octagon as well as in it, as two fighters fainted backstage – one moments before the walkout – while promotion chief Dana White criticized the cageside doctor in the main event.

The UFC returned to its Las Vegas home on Saturday night after a series of events on Fight Island in Abu Dhabi, but suffered an incident-hit night for many of the wrong reasons.

Trevin Giles was due to kick off the main card at the UFC’s Apex facility against middleweight rival Kevin Holland, but moments before fans were expecting the walkouts news filtered through that Giles had fainted backstage.

The incident was announced live on the ESPN+ and was put down to nerves from the 27-year-old Giles, who was due to make his sixth appearance in the octagon.

The fighter apparently recovered his senses soon enough to request that he still be allowed to fight, but Nevada Athletic Commission refused to clear him to compete.

UFC bosses were even said to have scrambled to find a replacement to fight Holland in the form of Ed Herman, whose own bout against Gerald Meerschaert had fallen through earlier in the day when Meerschaert tested positive for Covid-19.

However, Herman had flown out of Vegas, scuppering any hope of getting Holland in the octagon.

Just checked with @danawhite Said he tried to get Ed Herman to fight Kevin Holland, but when Meerschaert was out, Herman got upset, got on a plane and left, so they couldn’t do it. #UFCVegas5

Holland wished his stricken opponent well but suggested Giles had been looking for a way out of the fight since the weigh-in, and said he was still desperate for a bout.

“Line something up, tonight, let’s go,” he implored UFC bosses.

“I don’t know if Markus Perez already went home yet I don’t know if Ed Herman already hopped on the flight to go home, I mean…line them both up.”After his bout with Trevin Giles was cancelled @Trailblaze2top is looking to get a fight in as soon as possible. #UFCVegas5pic.twitter.com/zQfXdCEARW

The backstage drama was not done there, as Scottish fighter Joanne Calderwood fainted backstage  following her first-round submission loss to Brazil’s Jennifer Maia in their flyweight co-main event contest.

Calderwood was transported to hospital after fainting on her chair in the medical room, with her manager later telling MMA Fighting: “She’s OK now. She was getting checked out in the medical room and fainted while sitting down. (Her head coach and fiance) John Wood caught her, they laid her down and carted her out on a stretcher.”

Maia’s win burnished her claims for a shot at 125lbs ruler Valentina Shevchenko, who tweeted after the bout that she was waiting for the 31-year-old Brazilian.

There was controversy in the main event, where middleweight veteran Derek Brunson forced a screeching halt to the hype train surrounding the previously unbeaten Edmen Shahbazyan, defeating the 22-year-old via third-round TKO in a contest that many felt should not have bene allowed to go that far after Brunson had his opponent in major trouble with a ground-and-pound barrage at the end of the second round.

Referee Herb Dean allowed Shahbazyan to see out the round while the cageside doctor permitted him to head out for the third despite a lengthy assessment of his condition.

Brunson duly finished proceedings 26 seconds into the third round, although questions were raised over both referee Dean and the cageside doctor – including from UFC boss Dana White.

“Shahbazyan looked like he was out at the end of that (second) round,” White said at the post-fight press conference.

“First of all, the doctor’s obviously inexperienced. I don’t know anything about the doctor, but I’ve never seen him before.

“You’ve got Brunson, who ends that round strong, many could argue that fight could have been stopped there at the end of the round. I’m sure the ref thought that the guy would have time to go back.

“What you don’t do is talk to the guy for f*cking 10 minutes while he’s hurt. You know what I mean? Either stop the fight or let him continue, but go… Pull the trigger one way or the other. Stop the fight or don’t.”

Elsewhere, pundits including ESPN’s Brett Okamoto pointed the finger at referee Dean, who was recently involved in a heated late-stoppage row with pundit Dan Hardy on Fight Island.

Herb Dean is a great referee but his confidence is not high right now. He just half waved off the fight after the second round. If referees need to be anything, it’s decisive.

Shahbazyan suffered a first defeat in 12 professional contests, but was upbeat despite his surge up the middleweight rankings suffering a setback.

I’m ok everyone just need some stitches. Thank you for all your messages, love you all! Congrats to @derekbrunson tonight he did a great job. No excuses, it’s the fight game and I’ll be back! Blessed to have the… https://t.co/w020J5nKox

Brunson picked up a third win on the spin since his defeat to Israel Adesanya in November of 2018 as he enjoys something of a late-career renaissance.