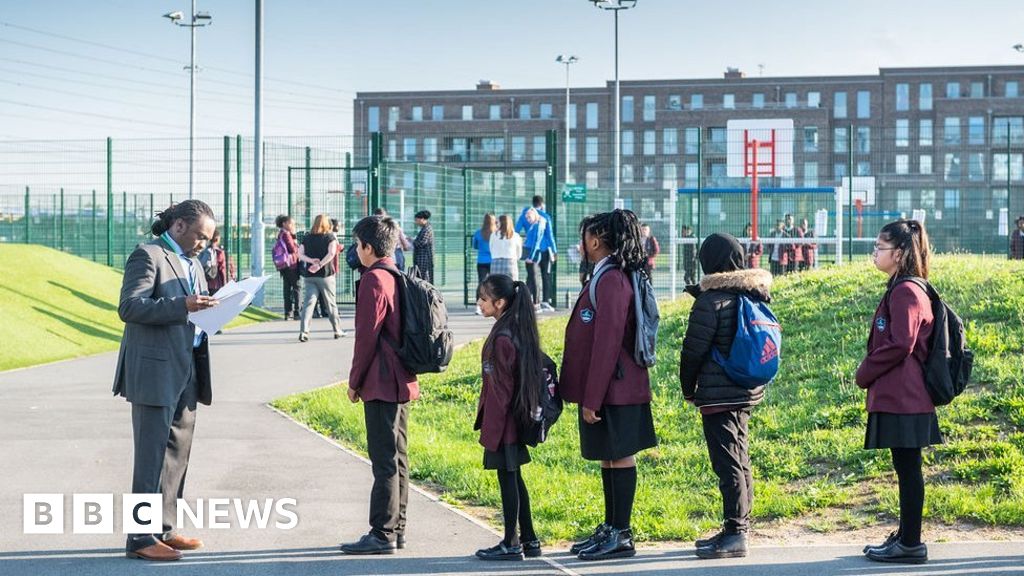 The number of schools in England sending home groups of pupils because of Covid-19 incidents has quadrupled in a week, according to the latest official figures.

Based on attendance last Thursday, they show 4% of schools not fully open because of confirmed or suspected cases – up from 1% the previous week.

This could mean about 900 schools sending home pupils.

Overall attendance has also dipped slightly from 88% to 87%.

This means over a million children were off school that day, whether from Covid-related or other reasons, with more pupils missing from secondary schools than primary.

The fall in attendance should “ring alarm bells” for the government, said Paul Whiteman, leader of the National Association of Head Teachers.

“Clearly the failure of Covid testing sits at the heart of this. The inability of staff and families to successfully get tested when they display symptoms means that schools are struggling with staffing, children are missing school, and ultimately that children’s education is being needlessly disrupted,” said Mr Whiteman.

This is the second set of Department for Education attendance figures since schools returned in the autumn – and they show a significant increase in schools sending home groups of pupils or whole year groups because of concerns about coronavirus.

But they also show the number of schools which were fully open had increased – up from 92% to 94% – because the previous week’s figures included schools that were still carrying out a phased start to the year or holding teacher training days.

The figures, based on responses from 76% of state schools, show almost no schools being completely closed – with 99.9% recorded as open.

This combination of more schools completing their reopening – and at the same time more schools sending pupils home because of Covid-19 – meant that the overall attendance figure balanced out as being similar to the previous week, from 88% to 87%.

This is well below what would be expected, with attendance rates usually around 95%.

An even lower proportion of vulnerable children, such as those with a social worker, were recorded as being at school, with an attendance rate of 81%.

Geoff Barton, leader of the ASCL head teachers’ union, said that with rising rates of infection and problems with Covid testing, the attendance figures were “not at all surprising”.

“Frankly, it is a great relief that the situation is not a lot worse,” said Mr Barton, who warned that even though schools were “working incredibly hard to manage this very difficult situation” it was going to be a “long, hard winter”.

Problems with getting Covid tests was making it harder for schools, said Kevin Courtney, joint leader of the National Education Union.

“This is eroding trust among parents, and it will be an uphill struggle for it to be regained,” he warned.

Education Secretary Gavin Williamson welcomed that 99.9% of schools were open, but said: “As we would expect, this data shows a small number of pupils are self-isolating in line with public health advice.”

He said schools were working “tremendously hard to ensure protective measures are in place to reduce the risks of transmission” and they had “access to timely advice and support through our helpline if they have a positive case”.