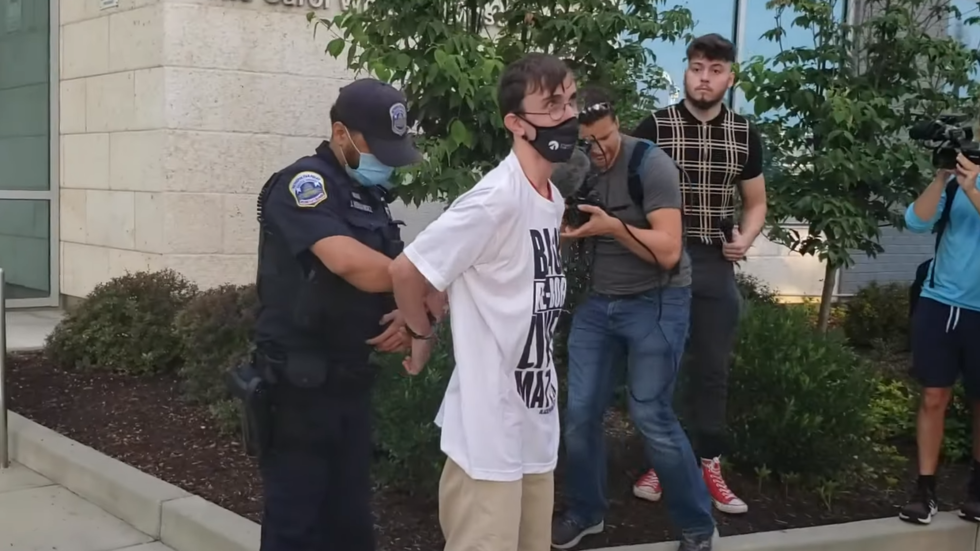 Black Lives Matter’s slogan has seemingly spawned new imitators with their own political agendas, as two anti-abortion activists were arrested for chalking their own pro-life message on a sidewalk outside an abortion clinic.

The pair of anti-abortion activists wrote their slogan – “Black Pre-born Lives Matter” – outside a Planned Parenthood clinic in Washington, DC, on Saturday. In a video later shared by the activists, a police officer is seen approaching the group and warning them to stop chalking, before arresting them when they continued regardless.

According to the organizers of Saturday’s protest, the Students For Life group had received a police permit to actually paint their message onto the street, and were surprised when they arrived to see “police cars threatening to arrest us.” The chalk, they said, was a backup plan that they thought would please the cops.

The activists say they were emboldened by DC Mayor Muriel Bowser’s decision in June to have ‘Black Lives Matter’ painted in 35-foot letters onto a street near the White House. New York’s Bill de Blasio followed suit last month, personally helping to daub the letters onto a prime stretch of Fifth Avenue – right outside Trump Tower.

They aren’t the only pro-lifers to daub similar messages on the pavement. Anti-abortion activist Tayler Hansen and his supporters have taken to painting “Baby Lives Matter” murals onto streets across the country, attracting national media attention when he did so in Salt Lake City, Utah last month.

The ‘Black Lives Matter’ slogan has been endorsed by politicians, corporations, and the mainstream media. However, it’s spawned a slew of similar slogans that haven’t been similarly approved. For instance, the pro-police counter-slogan ‘Blue Lives Matter’ has been slammed by BLM activists as racist.

However, the activists behind ‘Baby Lives Matter’ and ‘Black Pre-born Lives Matter’ claim to work on behalf of the black community. As the abortion rate among black women is almost four times higher than among white women, they consider organizations like Planned Parenthood anti-black. “Today, across America, Planned Parenthood will end 360 black lives,” they wrote on Saturday. “And we will no longer be silent.”