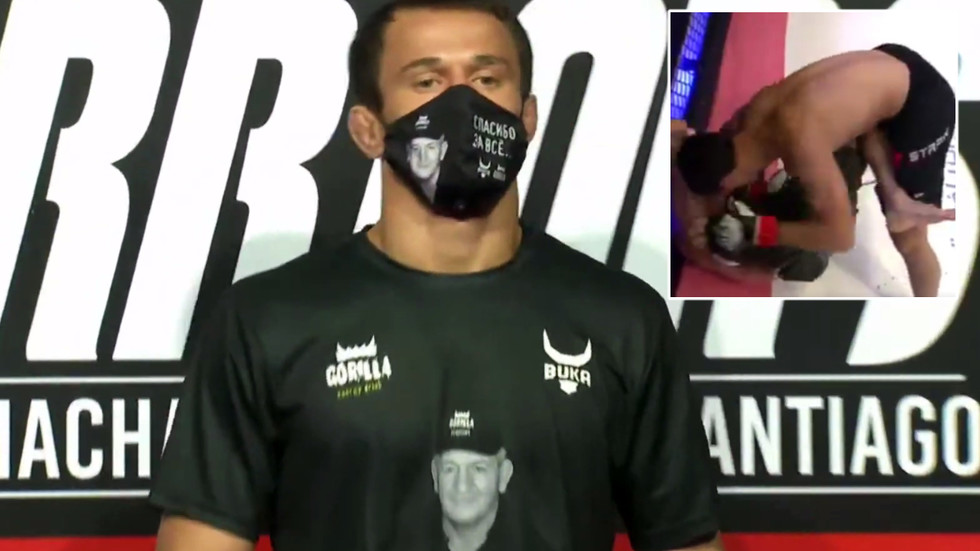 Khabib Nurmagomedov has guided his undefeated cousin to a 10th professional MMA win with a lightning victory in Dubai, having worn a t-shirt paying tribute to the UFC champion’s late father, Abdulmanap, at the weigh-in.

The lightweight had little chance to show his full range of skills as he crushed Finnish veteran Jerry Kvarnstrom with a vicious striking display before earning a verbal submission 40 seconds into the opening round of the UAE Warriors 12 card in Abu Dhabi.

That gave the rising star his fifth victory in a year and his second of 2020 after he knocked out Ruslan Tuyakov in the second round at GFC 24 in February.

Lightweight king Khabib was seen offering advice to his promising relative as he prepared to leave his dressing room, using his hands to demonstrate technical points as he sat backstage with the rest of the visiting Dagestani team.

Nurmagomedov wore a mask and top showing his late uncle when he weighed in, becoming the first of the revered MMA trainer’s fighters to compete since his passing from complications relating to the coronavirus earlier this month.

“Boom, baby,” said the suitably impressed commentary team as Nurmagomedov immediately walked down Kvarnstrom, delivering a devastating flurry of strikes and flooring his opponent before referee Marc Goddard stepped in.

“Perfect timing. Nobody wants to fight this guy.

Usman Nurmagomedov is something else. Sheeeesh that was a performance.

“Undefeated – what can’t he do? He really hasn’t been challenged yet.”

Nurmagomedov also won new fans for his brutal performance. “Usman Nurmagomedov is something else,” said one.

“Sheesh, that was a performance.”

Another joked: “Imagine trying to wrestle a dude named Usman Nurmagomedov. I would just quit right then and there.”