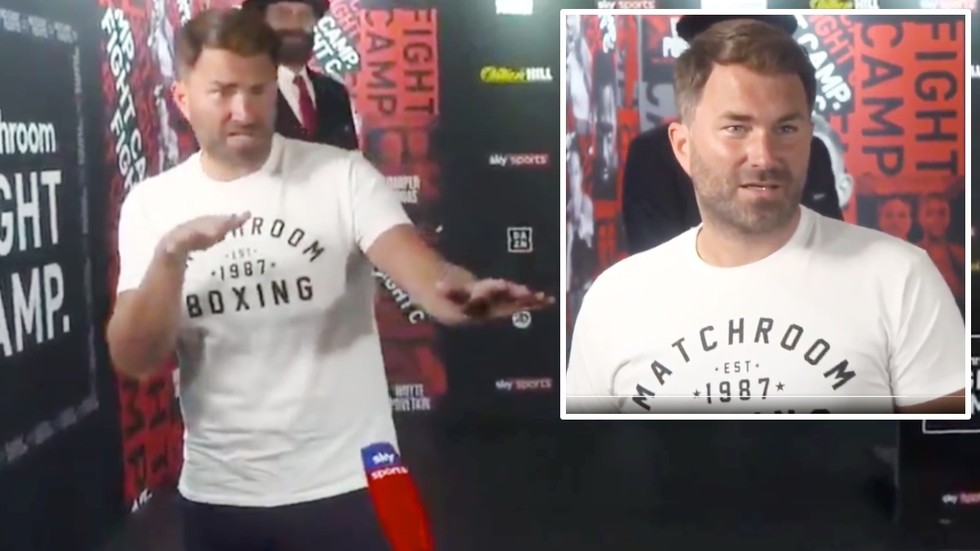 Matchroom Boxing promoter Eddie Hearn and his team have done a remarkable job to prepare for their innovative “Fight Camp” series in his back garden, but he slipped up in spectacular fashion during the live weigh-in broadcast.

Hearn and his team have produced hours of content via their YouTube channel in the lead-up to the first of four fight nights set for the back garden of Hearn’s family home in Brentwood, England.

But his appearance at the start of the live weigh-in broadcast turned into a nightmare for the promoter, whose belief that they were taking part in a rehearsal led to him being left red-faced and speechless.

The broadcast, which went live on Sky Sports in the UK, saw the host introduce Hearn from their “Fight Camp” setup. But, instead of launching into his pre-weigh-in introductions, Hearn theatrically pointed back to the host and, in a high-pitched voice exclaimed, “Shamone, motherf*ckers!”

There was a moment of stunned silence before Hearn asked, “It’s not live, is it?”

When he was told that they were indeed live on UK television, Hearn’s complexion visibly changed as he then covered his face, part in shock, part in embarrassment at his monumental faux-pas as the presenter apologized to viewers for the language.

Laughter then erupted from around the set as Hearn realized he was on live TV before he eventually composed himself and the broadcast continued.

The video clip of Hearn was swiftly shared across social media and even found its way back to Hearn himself who, being a good sport, shared the clip himself, with the message, “That was awkward..when you think it’s a rehearsal.”