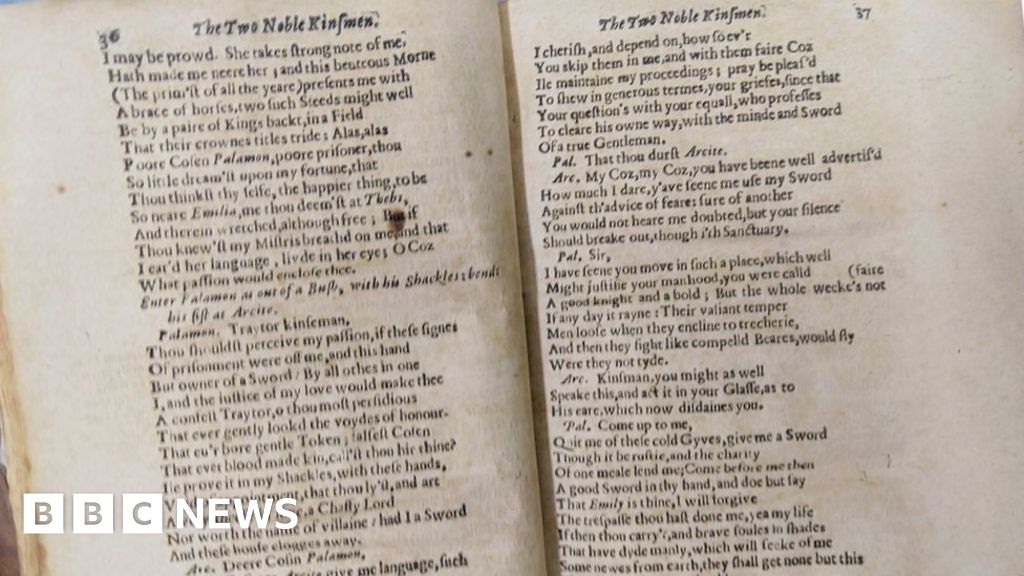 A rare edition of Shakespeare’s last play has been found in a Scottish Catholic college in Spain.

The Two Noble Kinsmen, written by Shakespeare with John Fletcher, was found by a researcher investigating the work of the Scots economist Adam Smith.

The 1634 volume could be the oldest Shakespearean work in the country.

In the 17th Century the seminary in Madrid was an important source of English literature for Spanish intellectuals.

The Two Noble Kinsmen was included in a volume made up of several English plays printed from 1630 to 1635.

Dr John Stone, of the University of Barcelona, said he found it among old books in the library of the Real Colegio de Escoceses – Royal Scots College (RSC) -which is now in Salamanca.

What is The Two Noble Kinsmen about?

“Friendship turns to rivalry in this study of the intoxication and strangeness of love,” is how the Royal Shakespeare Company described the play, which is based on Chaucer’s The Knight’s Tale.

It was probably written around 1613-14 by Shakespeare and John Fletcher, one of the house playwrights in the Bard’s theatre company the King’s Men.

It was likely to have been Shakespeare’s last play before he retired to Stratford-on-Avon. He died there in 1616 at the age of 52.

Described as a “tragicomedy” the play features best friends, who are knights captured in a battle.

From the window of their prison they see a beautiful woman with whom they each fall in love.

Within a moment they have turned from intimate friends to jealous rivals in a strange love story which features absurd adventures and confusions.

Dr Stone, who worked in Edinburgh and Aberdeen, said: “It is likely these plays arrived as part of some student’s personal library or at the request of the rector of the Royal Scots College, Hugh Semple, who was friends with the Spanish playwright Lope de Vega and had more plays in his personal library.

“It is likely these plays were acquired around 1635 by an English or Scottish traveller who might have wanted to take these plays – all London editions – with him to Madrid.

“By the 1630s English plays were increasingly associated in Spain with elite culture.

“This small community of Scots was briefly the most significant intellectual bridge between the Spanish and English-speaking worlds.”

In the 17th and 18th Centuries collections of books in English were rare in Spain because of ecclesiastical censorship, but the Scots college had special authorisation to import whatever they wanted.

Plays in English were exceptionally rare in the period – and it had previously been thought the oldest work by Shakespeare in Spain was a volume found in the Royal English College of Saint Alban in Valladolid.

It is thought to have arrived in Spain in the decade after the volume found in the Scots college.

The rector of the Scots College, Father Tom Kilbride, said the college was proud such an important work had been discovered in its library.

He said: “It says a lot about the kind of education the trainee priests were getting from the foundation of the college in Madrid in 1627, a rounded education in which the culture of the period played an important part.

“To think that plays would have been read, and possibly performed at that time is quite exciting.

“There was clearly a great interest in Spain at that time in English literature.”

The RSC no longer trains men for the priesthood in Scotland, but offers preparatory six-month courses for those expressing a vocation, and holds regular retreats and conferences for the Scottish Catholic community.

In Act 5 scene 1 Arcite, one of the knights, talks about “dusty and old titles”, which sums up the find in Salamanca.