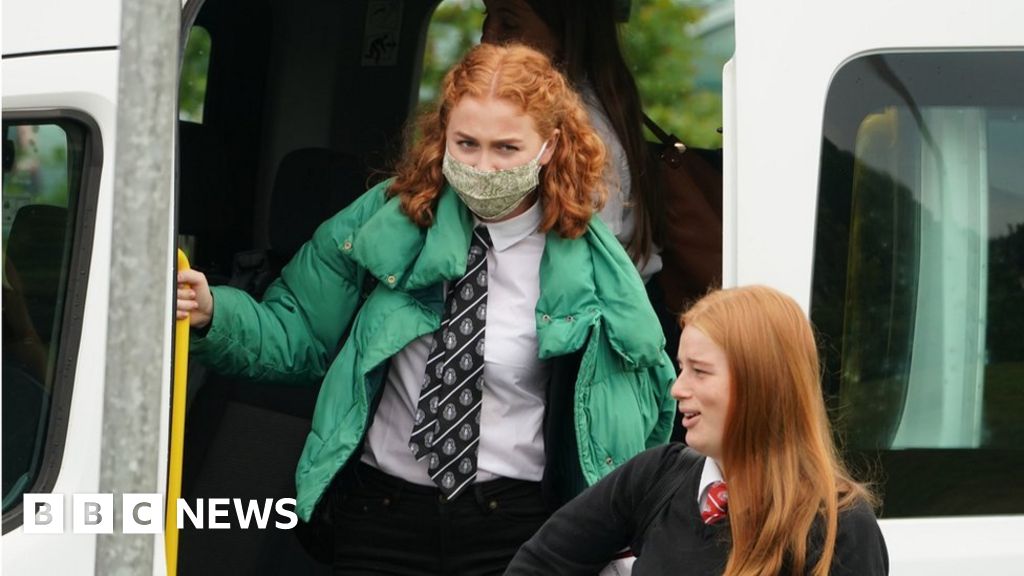 School bus drivers have raised concerns about a lack of social distancing on services travelling at full capacity, with many children not wearing masks.

The Unite union said it was “extremely worried” drivers were at risk of catching Covid-19 on “packed” buses.

Social distancing is not mandatory on dedicated school buses under government guidance across the UK, although it should happen where possible.

The government says it is providing £40m to help increase capacity.

Government guidance for England says that, where possible, social distancing should be “maximised” between individuals or “bubbles” of children who stay together throughout the course of the day.

Other safety measures recommended include more frequent cleaning, maximising ventilation through opening windows and ceiling vents, and allocating seats to ensure children sit with their “bubble” if possible.

The guidance says the measures are an “appropriate balance” because the overall risk to children of serious illness from Covid-19 is very low, they do not mix with the general public on school buses, and services often carry the same children on a regular basis.

Similar guidance is in place for Scotland, Wales and Northern Ireland.

Sheamus Greene, who drives a school bus in Fermanagh, Northern Ireland, which holds 45 children and travels at full capacity, says there is no social distancing on the service.

He says the bus carries children from eight different schools, who are on board for between 20 and 35 minutes.

Pupils over the age of 12 are advised to wear face coverings but Mr Greene says only around 50% on his bus do.

Unlike on public transport, face coverings are not compulsory on dedicated school buses in Northern Ireland, Wales or England, although they are recommended. However, they should be worn by children aged five and over on services in Scotland.

Mr Greene, who is also a Sinn Féin councillor, says a plastic screen was installed around his driver’s seat after he raised concerns with the Education Authority – but it is not air tight.

He says there is very little ventilation on the bus, with only one skylight window able to be opened and this has to be closed if it rains, which he fears will allow the virus to spread more easily.

Children are at extremely low risk of becoming ill from Covid-19 but evidence on how likely they are to spread the virus is less certain.

Mr Greene, 55, says he is worried about transmitting the virus to family members at home, who have underlying health conditions making them more vulnerable to Covid-19.

“There’s an awful lot of drivers in this area in their 70s and mid to late 60s, and I know some of them have underlying health problems as well,” he adds.

Mr Greene says he wants to see evidence that travelling without social distancing is safe – and, if it isn’t, he says capacity should be reduced.

A spokesperson for the Education Authority said it had put in place a range of safety measures, in line with government advice, including distributing more than 150,000 items of PPE to drivers, installing screens and hand sanitiser dispensers on vehicles, and enhanced cleaning.

“Our drivers and escorts play a vital role in enabling children and young people to access education, and their health and wellbeing is important to us, so we are committed to keeping our guidance under review in line with government advice,” the spokesperson said.

Michael – not his real name – drives a minibus for a special needs school in Surrey.

With children travelling in the vehicle for up to an hour and a half each morning, Michael, who is 61 and asthmatic, says he is “very worried” about catching the virus.

“During the winter season colds are rife because they just go round and round the vehicle,” he says.

“If the common cold can whizz around a vehicle very easily, it does concern me enormously that coronavirus could also spread come cold season.”

The vehicle carries up to eight passengers but after Michael raised concerns with his employer the capacity was reduced to seven, allowing a one-seat gap between him and the next child.

While the children wear masks, Michael – who does not want to use his real name for fear of losing his job – says they are not worn properly, with the children’s noses often uncovered.

He wants capacity reduced to four passengers to enable social distancing and medical-grade masks for drivers.

A Surrey County Council spokesman said both the council and the Department for Transport had provided guidance to schools and bus operators on how to safely run school transport.

“It’s important that we all work together to ensure that appropriate measures are in place and the risk to passengers, drivers and passenger assistants is minimised, therefore we’re always willing to discuss any concerns with transport operators,” he said.

He says a lack of consistency in guidance for public transport and dedicated school services means the situation varies across the country, with some buses “packed” full of children.

“I get call after call from drivers saying to me they’re very, very fearful,” he says.

“Not only could they be infected themselves but when they return home after their shift they could unwittingly be transmitting the virus to members of their family.”