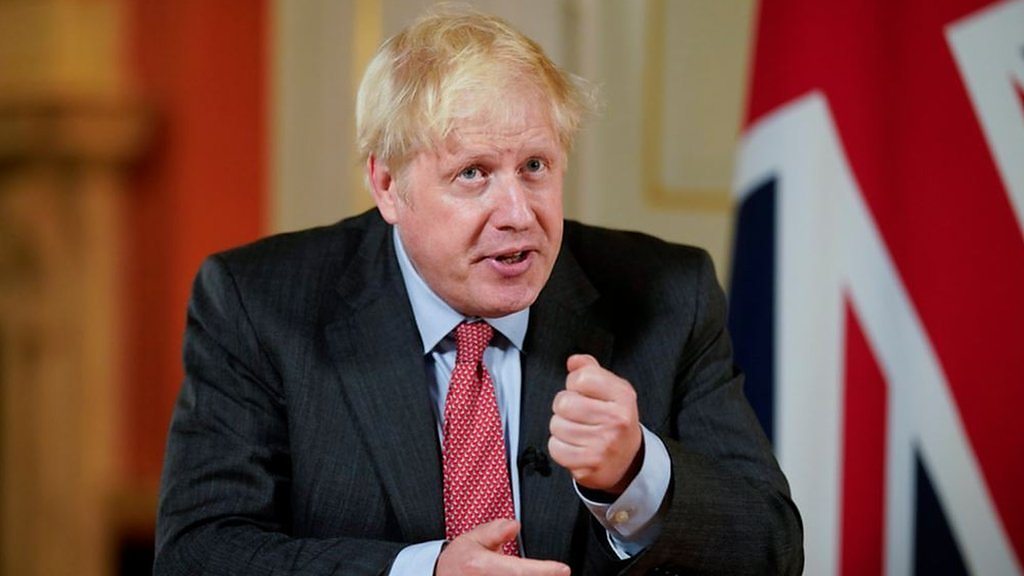 The government has warned of “tougher measures” if people do not follow the latest coronavirus restrictions.

In a television broadcast on Tuesday night, Prime Minister Boris Johnson said “we must reserve the right to go further” if cases continue to rise.

New rules were announced across the UK on Tuesday, with Mr Johnson warning they could last up to six months.

In England, office workers are being told to work from home again and rules on face coverings have been expanded.

Pubs, restaurants and other hospitality venues will have to close by 22:00 BST, and the number of people allowed at weddings has been halved.

Meanwhile, the fines for breaking the rules will also increase to £200 on the first offence.

Hospitality venues will also have to close early in Scotland and Wales – but Scotland has gone further, banning people from visiting other people’s homes. Northern Ireland has also already banned households mixing indoors.

The government’s chief medical adviser, Prof Chris Whitty, is understood to believe it is inevitable England will to have to follow Scotland’s latest move, according to the Times.

Conservative MPs also expect limits on visits to households to be “the next step”, according to Nicholas Watt, political editor of the BBC’s Newsnight.

“They don’t like it but they could probably live with it,” he said, though he added that if the government went further with restrictions on the hospitality sector “that would really create insurrection on the Tory benches”.

The government’s warning comes six months after the UK’s coronavirus lockdown – first announced on the 23 March – which saw strict curbs on life to tackle the spread of the virus.

People were told to only leave home for one of four reasons, including shopping for food and medicine, exercise, medical needs, and travelling to and from work “where absolutely necessary”.

In his pre-recorded address from Downing Street, Mr Johnson said he was “spiritually reluctant” to infringe on people’s freedoms, “but unless we take action the risk is that we will have to go for tougher measures later, when the deaths have already mounted”.

He added that while the vast majority have complied with the measures so far, “there have been too many breaches”.

Former Labour home secretary Alan Johnson has since criticised the prime minister for suggesting the public is to blame for rising cases.

“The public have been extremely compliant and obedient,” he told the BBC’s Newsnight.

“But the message hasn’t always been clear and it’s preposterous of the prime minister to even suggest in his speech that the problem here is somehow the public.”

“Wherever possible it is much better to stick together, because simplicity of messaging is one of the things that will make the biggest difference in terms of complying with the rules,” he said.

The devolved nations have their own powers over coronavirus restrictions, and their leaders made separate televised addresses on Tuesday evening.

Scotland’s First Minister Nicola Sturgeon said the nation had to choose its priorities, adding that staying out of other people’s houses gave “the best chance of bringing Covid back under control”.

Meanwhile, Wales’ First Minister Mark Drakeford urged people not to let the virus “take a hold of our lives again”, and Northern Ireland’s First Minister Arlene Foster said tougher restrictions should act as a “wake-up call” that “we are not out of the woods”.

A televised address from the prime minister is not the rarity it once was, but it’s still a big moment.

The gravity of the situation is such that, Boris Johnson’s argument goes, a renewed national effort is required to bring the virus back under control.

Behind the echoes of wartime rhetoric and Johnsonian linguistic flourishes was a simple message; stick with it for six months and we’ll get through this.

But as he acknowledged, there are some who say he’s taking the wrong decisions and the public’s patience for further restrictions may not be what it was six months ago.

There was optimism that better days lay ahead but a vaccine and mass testing were “hopes and dreams” not the reality, not now.

Scotland’s First Minister had gone further so comparisons will be inevitable; which tactics will work?

While England and the UK’s nerve is being tested again, so too is the prime minister and the government’s leadership and its strategy.

The prime minister told MPs on Tuesday that the new rules were “carefully judged” to achieve the maximum reduction in the R number – which measures how quickly the virus is spreading – while causing “the minimum damage to lives and livelihoods”.

And the number of UK cases rose by 4,926 on Tuesday, government figures showed, with deaths increasing by 37.

What are the new rules?