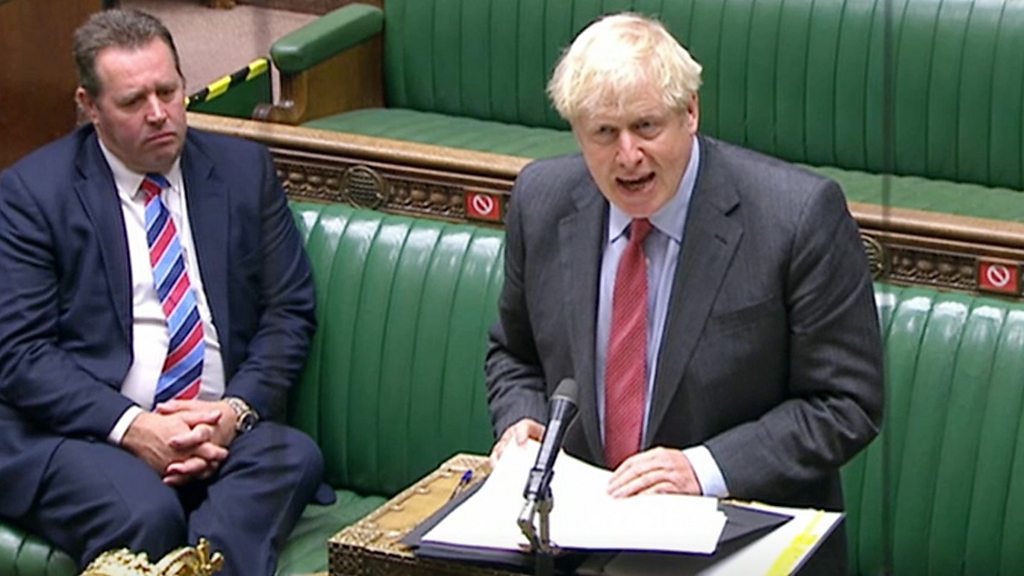 Prime Minister Boris Johnson said the UK had reached “a perilous turning point” as he set out new coronavirus restrictions for England which could last for up to six months.

He told MPs that hospitality businesses would close at 22:00 and weddings would be limited to a maximum of 15 people.

Face masks will be compulsory for retail staff and fines for breaking the rules will increase, he said.

Office workers are also being told to stay at home if they can.

“We always knew that while we might have driven the virus into retreat, the prospect of a second wave was real. I’m sorry to say that, as in Spain and France and many other countries, we’ve reached a perilous turning point,” he said.

After a meeting of the Cobra emergency committee this morning, Mr Johnson told the House of Commons he would provide police and local authorities with extra funding to enforce the regulations and the option to draw on military support.

He said the new rules were “carefully judged” to achieve the maximum reduction in the R number – which measures how quickly the virus is spreading – while causing “the minimum damage to lives and livelihoods”.

He said this was “by no means a return to the full lockdown of March”, with no general instructions to stay at home. Businesses, schools, colleges and universities will remain open.

In the last fortnight, hospital admissions have doubled and Covid-19 is likely to spread faster in winter, Mr Johnson said, adding: “So this is the moment when we must act.”

If these restrictions fail to bring the R number below one – the point where the epidemic is no longer growing – “then we reserve the right to deploy greater fire power with significantly greater restrictions” he said.