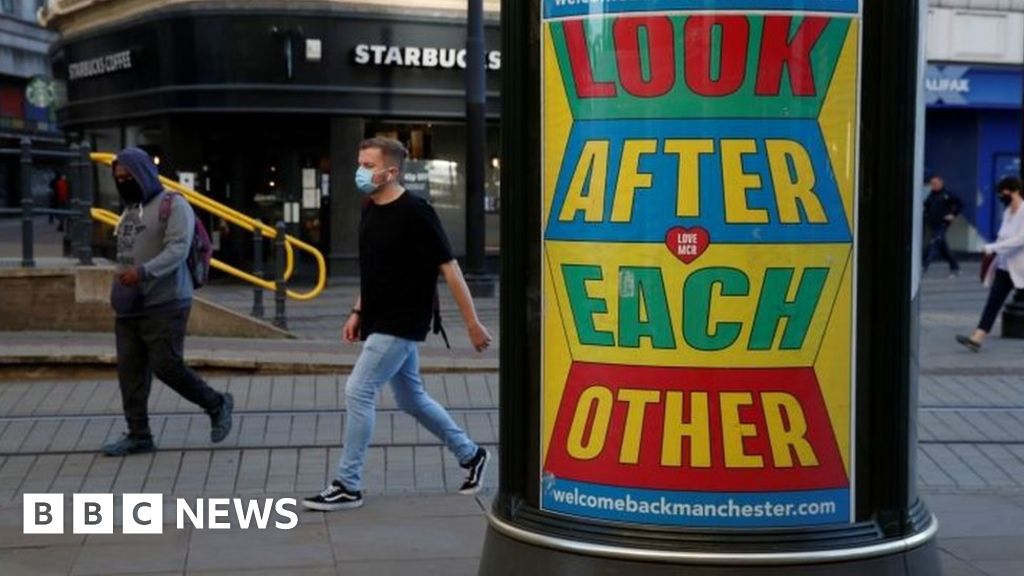 The government has been accused of causing “confusion and distress” with its handling of new lockdown rules.

People living in Greater Manchester and other parts of northern England have been told they cannot mix with other households in private homes or gardens.

Greater Manchester’s mayor and deputy mayor, along with council leaders, raised “concerns” about how the changes were announced by the government.

The government announced the new lockdown restrictions shortly after 21:15 BST on Thursday.

“We announced the decision as soon as practical,” added Mr Hancock, who said he had been working with “local authorities, like Andy Burnham” to tackle a rise in cases.

On Friday, a statement released by the Greater Manchester Combined Authority (GMCA) in partnership with council leaders said the timing and content of the announcement “has caused confusion and distress for our residents”.

It is “strongly recommended” that in future “full supporting details should be available to the public at the moment any public or media statement is made”, the GMCA said.

Greater Manchester leaders also claimed they are not convinced that including gatherings in gardens in the restrictions, which will be reviewed weekly, is “a proportionate measure”.

“We therefore call on the government to provide further evidence or amend the regulations,” a GMCA spokesperson added.

Further support for hospitality businesses that have recently opened, as well as for people who have been shielding, is needed as well, the GMCA said.

Millions of people in parts of northern England are subject to the new restrictions, which ban separate households from meeting each other at home, after a spike in Covid-19 cases.

Greater Manchester Police (GMP) said the force “will engage with people, explain the current circumstances and encourage people to do the right thing in complying with the government guidelines”.

“We will only take enforcement action as a last resort, when people are not listening and putting others at risk,” a GMP spokesperson added.

People in Greater Manchester have described their confusion at the sudden news.

Zoe Patrick, 33, from Stockport, said the rules meant she and her husband would find it difficult to look after their son.

“This is now very difficult for us as we did have our son’s grandparents over to help us… but now of course these new rules mean we can’t do that so we will have to struggle on our own.”

Jenny Cooper, 36, from Burnage, has Crohn’s disease so has been shielding since March.

She said: “It’s really important to keep the vulnerable safe, but it does feel very sudden.

“We were on the cusp of freedom. It’s disappointing as many of us feel left behind.”

Hospitality firms have also been hit by the sudden restrictions.

Piotr Pawlowski, who runs Cafe Bistro in Flixton, Trafford, said he had received cancellations for their tapas evenings this weekend, which he has been preparing for all week.

“We are not going to make the numbers we should do so food is going to go to waste,” he said.

The cafe remained open for takeaway throughout the lockdown but suffered a 30-40% loss in sales.

He said the new restrictions, which ban members of two different households from mixing in restaurants, would not help but “it’s something we need to follow”.

“Safety is most important for us and our customers,” he added.

Saif Al-Islam Chaudhry, 35, who owns an art company, said “it is not a nice feeling for anyone”.

“I think the timing of this may seem dubious to many people.”

Referring to Eid celebrations, he said: “If I understood the new restriction correctly, Muslims can use the existing guidelines to meet in public parks. That is what I am intending to do today.”

The owner of street food business Grub in Manchester Jason Bailey, 39, said “this could be the setback to push us over the edge”.

“Keeping people safe has to be the top priority… It’s just how it’s been done, the timing is awful.

“We’re already wading through queries from people totally confused by the announcements trying to cancel their table reservations, despite the fact we are an outside food market.

“We’ll undoubtedly spend more time and money trying to cope with it all and at the moment we’re only just sustainable as a business running on a reduced capacity.”

Many of the areas subjected to the tighter rules are among those with the highest rates of new infections in the past week.

In Greater Manchester, the only borough to have seen cases come down substantially is Rochdale, but even then it remains one of the areas with the highest new infection rates out of more than 300 local authorities in England.

Oldham’s cases in particular have been surging and the local council sounded the alarm earlier this week.

In the week to 26 July the area recorded 134 cases of coronavirus, up from 44 the week before. This means almost 57 positive tests for every 100,000 people in Oldham that week.

While Wigan is much further down the table for new cases, its figures have risen as well.

Bolton has not recorded a rise in the week to 26 July, but provisional data for the week to 28 July suggests it may move slightly up, although these figures are subject to revision as more test results come in.