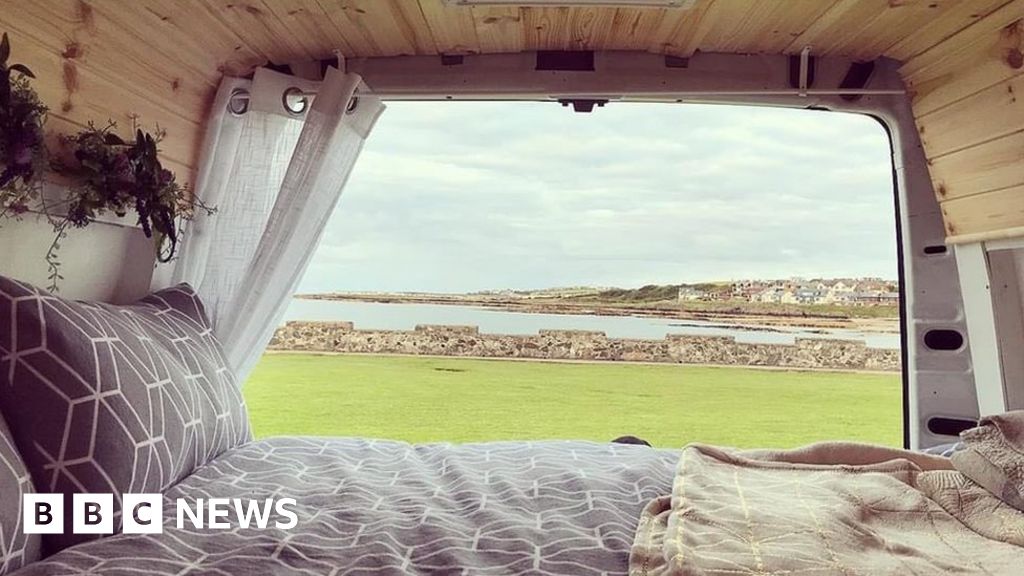 A 100-day DIY project, one musician’s live-in transport and a couple’s “staycation-mobile” – four people share their “advantures” and show us inside the fruits of their lockdown labour.

‘Furloughed, but still in work mode’

When Jennifer McKechnie, a personal trainer from Belfast, was furloughed on 21 March, she decided to use her time in lockdown to fulfil a lifelong goal.

Jennifer, an avid skier, had dreamed of one day converting a van or minibus and travelling to the French Alps with her two huskies, Zack and Jake.

The 31-year-old, a self-proclaimed novice, said she had “no clue” where to start when she began converting her 2005 Iveco Daily.

She set herself the goal of converting her van into a liveable space within 100 days.

Jennifer began work on the Daily on 22 March and finished on 30 June.

“After I got the news I was furloughed, I went straight to get supplies and began the project,” Jennifer told BBC News NI.

Jennifer said it was great to concentrate on something productive during such a stressful and uncertain time.

“It was great to have that focus, I set myself a work routine and stuck to it,” Jennifer explained.

“I was furloughed from work, but I was still in work mode,” she added.

As the ongoing pandemic means a trek to the Alps is currently off the cards, Jennifer and her two huskies have temporarily parked plans to head for the slopes, opting instead for a travel holiday around Northern Ireland.

From cruises to a camper van

Like many musicians, Caolán McLaughlin was hit hard by the pandemic.

The singer from Londonderry, who relies heavily on the gig economy, decided to take his show on the road when work started to dry up.

“I always knew my first house would be a camper, so that’s me on the property ladder now, I guess,” Caolán said.

He scoured social media for shows, festivals and even garden parties, looking for “basically anywhere that will let me play”.

Using his beloved Renault Master camper, Rosie, as a base, the 34-year-old set his sights overseas and was offered a gig at a music festival in Denmark.

However, when BBC News NI caught up with him he had just broken down beside a road near the Danish border on his way to the festival.

“I set off from Derry to Belfast, Belfast to Liverpool, then to Harwich, then Holland to Denmark and now I have fallen at the last hurdle,” he explained.

Despite the setback, Caolán was in good spirits as he waited for roadside assistance.

“Just my luck to break down at the last hour, but sure it’ll make for a good story,” he said.

Caolán had to spend the night in a hostel in Flensburg, Germany, while the van spent the night in a garage, but he hopes to continue gigging “once Rosie is alive and kicking”.

The Newtownabbey couple converted their 2003 Toyota Hiace together so that they could travel around Ireland’s beaches catching waves while saving money on accommodation.

Before lockdown, neither knew how to convert a van, but thought the experience would be fun.

“We finished off the build just as lockdown restrictions started to ease,” explained Jonny.

When restrictions were eased in July, the couple decided now “was a good a time as any to hit the road”.

The pair travelled along the Wild Atlantic Way catching waves and staying in their isolated “little home on wheels”.

They said it was a “strange experience”, as they found towns and villages still mostly deserted due to the pandemic.

However, both said they enjoyed having such places “all to themselves” – for a while.